Five years. Five years ago today I arrived at Via Christi hospital for what was to be a routine removal of a cyst. I truly believed that that was all it was. I was a little anxious, but more so about what kind of scar the excision would leave than anything. I didn't even really want anyone to go with me, because I was so sure it was nothing and didn't want anyone to make a fuss.

There was nothing in my life that could've prepared me for what happened when I woke up. I remember groggily noting that Bill and Hunter were in the room with me. Belatedly, I noticed the surgeon was there too.

And then he spoke.

His words are still seared into my brain today.

It was as if everything turned white, with fuzzy edges (the movie 50/50 with Joseph Gordon-Levitt NAILED that part).

EVERYTHING disappeared, save for his voice and those words. First I looked at Hunter, my eighth-grade son. And then I realized that, for both his sake and mine, I needed to keep it together and figure out what those words would mean for me.

However, I was so groggy that I missed a lot of the finer details about what exactly those words would mean for me.

It wasn't until the next day that I realized my surgeries were far from over.

I was a bitch to be around once that little bombshell dropped, I can promise you that.

So it was that, a week later, I returned for lymph node removal to ascertain what stage my cancer was. I spent some great days and ultra-comfortable nights attached to a bunch of tubing and a drain bulb. But, in the end, the nodes were negative. The cancer hadn't spread, which made me Stage One.

I thought that meant that I was done with the pesky little setback.

Once again, though, I should never be told anything when I'm coming out of surgery. It turned out that my young age, coupled with the fact that my tumor was the most aggressive type (Grade Three), meant that I would have to have chemo and radiation as a preventative measure.

I was super pissed. I had shit to do, and this cancer was really going to mess it up.

The next months were whirlwinds of doctors, specialists, more surgery (the chemo port insertion, which looked like a small doorknob sticking out from under my collarbone) and hair loss.

Chemo: the nausea was like nothing I can describe, then or now. The neuropathy was debilitating. The baldness would have been more devastating than it was, but I was so sick I really couldn't care (I did love how smooth my head was, though).

None of those things seemed that bad, though, because I had such amazing people in my life who loved and encouraged me through every sick day. The people who took care of me and the people who bolstered my resolve on a daily basis? Well, I'll owe a debt to them for the rest of my life - one that I can never begin to repay.

Unfortunately, not everyone who started with me five years ago made it to this point with me.

And that's what I hate the most about cancer. It's so cruel. I watched it break people who were by my side during treatment, either literally or figuratively. Young people. Older people. People that had no fucking business going through that kind of pain. People who had small children. I communicated with them all.

Two of them didn't make it.

I never thought the five-year crossover to survivor status would really get here. Every check-up, every mammogram, every ultrasound brought new waves of fear and expectation that round two was imminent.

Then there are the parts that will always stay with me. I can't ever have my blood pressure taken on my right arm. I will never again sweat under my right breast. I have a fun collection of scars and radiation tattoos, and my skin has some interesting, random discoloration. I have episodes of short-term memory loss, holdovers from "chemo brain." Part of my mind feels like it's locked away, and damned if I know where I put the key.

Every single one of those things is a tiny price to pay for my post-cancer life, because so many more positive things came from those dark days.

What cancer did for me? It gave me an appreciation for life that I previously lacked.

I enjoy every sandwich now, even though I still inhale my food.

Spending so many weeks wishing that I could sleep through chemo makes me thankful for every time I get to walk out into the sunlight.

I'm grateful for every bad hair day, because every time I start to curse the interesting half-ass, thin semi-waves that grew from my head after chemo, I remind myself how great it is to have hair at all.

It was a long five years, but today I finally cross over from remission to survivor status. The likelihood of my recurrence of cancer has dropped significantly from the 35% it was in 2010.

As great as it feels to hit this mark, though, it is so, so bittersweet. It is so, so emotional. It is remembering my supporters who didn't get the privilege of five years. Although I get that life is unfair, although I get that none of us have the guarantee of health and longevity, nobody deserves that pain.

So I just want to say thank you to everyone who got me through it.

I want to thank my son for telling me he wouldn't put the dishes away when I was sick, because if he did, then I would grow to expect it.

I want to thank my family for making my bald head a big joke (duct tape hair removal! Lathering it up with a wig of shaving cream and getting rid of the weird patches of stubble!) and normalizing it in the process. Like when we had Italian Night since I was already wearing bro tanks throughout radiation. 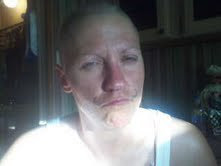 Playing the cancer card was the best thing ever. 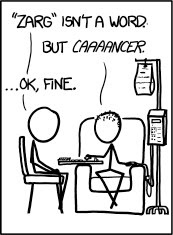 I want to thank those who got "Team Mom-Tard" bracelets - and wore them. 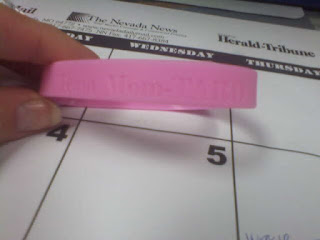 I've become an advocate for cancer research in the last five years as a result. I spent several years on the Board of Directors for Vernon County Cancer Relief. I have counseled many new diagnoses through their own journeys, because it's scary as hell in the beginning.

I have said, more times than I can count, that cancer was the best thing to ever happen to me, and I still mean it. Cancer takes away so much, but what it gave me was my life. It gave me much-needed strength, and confidence, and resolve. It gave me appreciation, and love, and new perspectives on so much.

It can still come back. I'll never be in the clear, not really. But I can handle it.

Because I'm out of remission - and into the chapter I've wanted to write for a long, long time.