"Well, you're definitely not leaving here this time without a baby."
It was those words, delivered by the doctor on the occasion of what was both my third attempt to bring my child into the world and the first time the hospital staff took me seriously, that made what was about to happen so real.

I mean, don't get me wrong. It had definitely felt real prior to that moment, specifically when I hit the seven-point-five-month mark and our rickety window air unit quit working in what was probably the hottest July in the history of the world (just give me this one, okay? Thanks). Now, though, NOW, it really occurred to me that I had walked into the hospital with my child safely inside of me, but I would be leaving with him in a decidedly less safe position. Well, PROBABLY less safe. I had made some really poor dietary choices in the course of the last 9.1 months, so he was probably going to be better off once he was born, but still. It was going to be a whole lot harder to care for him once I could hear him crying and didn't have that handy umbilical cord to provide round-the-clock sustenance.

So, I panicked. I was already in a less-than-stellar mood after my arrival, when the nurses dragged the cattle scale out in the hallway and had me get on it in front of the whole staff like some kind of circus freak. Sure, I knew that the day I delivered wasn't going to be my proudest moment, weight-wise. Sure, I knew I was housing a whole other human when I got on the scale. But it was hard to breathe and my feet were swollen and although I had the best hair thickness of my life, I had a matching body thickness that made it a little hard to count my blessings. Or move. Did I mention I had outgrown my maternity shorts? My MATERNITY shorts.

These were the kinds of thoughts that distracted me throughout my pregnancy. So hearing that I was definitely not leaving without a baby jolted me right back into the end game of this little life journey, in which I would be responsible for a whole other person. Not in the way I was responsible for baby-sitting my younger siblings (hell, Shannon damn near scalped herself under my care when she was three, and they were just going to let me leave the hospital with a new human? Without some kind of psych eval? How can that be legal?!), but in a way that demanded care, like, all of the times.

I couldn't even take care of MYSELF that well.

The next 12 hours kind of drifted by. I remember the contractions were super painful, and I had the nurses readjust the belt on my stomach because there's no way the readings indicating contraction severity were right. These lines barely skimmed the bottom of the page! I had BIG pain. I had off-the-charts pain. I was very passive at 21, but not that day. I bypassed passive, shot right over passive-aggressive, and told the nurses in no uncertain terms that the belt needed adjusted, because I hurt a lot more than that. Bless their hearts for not openly laughing at me. They even humored me by readjusting the belt.

The line stayed at the bottom of the page.

Aside from that embarrassing little moment, I remember sneaking McDonald's fries and Russell Stover chocolates before the epidural. Before the anesthesiologist (the most beautiful person I had ever seen, incidentally) administered it, the nurses wanted to make sure I hadn't eaten anything.

And then things moved pretty fast. I remember laughing at the lines shooting off the top of the page, because I didn't feel ANYTHING. I remember the doctor sliding in the door (I had interrupted him while he was at the theater) pretty much just in time to catch my son. I remember them saying "It's a BOY!" I remember thinking, "Thank GOD!"

And then they were laying him on top of me without so much as an introduction. He was wrinkly and almost hot pink, with what looked like a full black wig on his head. He was pissed. He was screaming.

He was the most beautiful thing I had ever seen.

It's weird how crystal-clear some memories are. The first thing I thought when I met my son was "So...it was you."

It was you who made me so sick for four months.

It was you who used to amuse me during the first game we ever played together, the one where I would set items on my stomach and you would kick them off.

It was you who let me know what heartburn was.

From that point, my purpose in life snapped into place with a clarity I had never before known.

I was supposed to be your mom.

For the first three months, I wasn't sure this was the job for me. It was like the best job I could ever get, but then I show up for my first day and realize I'm SO under-qualified. You didn't sleep. Like, you just didn't. I used to record every time you woke up in a notebook, sure that later I wouldn't believe it.

You woke up EVERY HOUR. Around the clock. For real, you did not sleep more than an hour at a time for THREE MONTHS.

We got an invitation in the mail to be a Nielson family. I was amazing at it, because I watched a lot of TV while you weren't sleeping. A LOT. I got a QVC card, or, as the insiders called it, a Q-Card. I ordered QVC. A lot of QVC.

It's sad what you'll do when you don't sleep.

But the other thing I did during all of that non-sleep was completely fall for you. Don't get me wrong, you had me from the second I saw you. But this, this feeling, was indescribable. And, oh Lord, a Christmas miracle!, you slept for six straight hours once in late December. 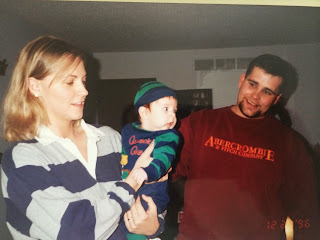 You didn't need me much, overall. You were walking at nine months. 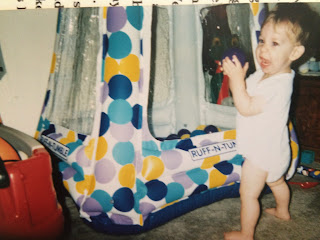 The month before you turned two, you decided you'd potty-train yourself and refused to wear diapers anymore.

You didn't have one accident. Ever. Not even one.

When you were three, you banned me from the bathroom and took over your own personal hygiene.

You began to teach yourself to read at four because you wanted to be able to read your video-game subtitles. 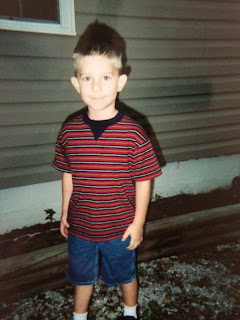 At six, your kindergarten teacher told me at parent-teacher conferences that she couldn't wrap her head around the fact that you had mastered the art of sarcasm so well. "I want to laugh, but I really can't," she confided. I have Ryan and Shannon to thank for that one, really. You never had a shot, kid.

Your teachers all loved you. I heard over and over, at conference after conference, that you were a dream. And you were. People would try to credit your dad and me for the way you behaved, and I would tell them the truth, that we just happened to be there. You were just that perfect. It was so damn weird.

And awesome. Don't get me wrong. It was more awesome than weird. I just kept thinking, when will it happen? When will he show that he, too, can have a bad day?

Don't get cocky. It's not like you were THAT perfect. Sunday nights during the school year were pure hell. Remember the lavender ritual? Remember Benadryl? Remember the stress of not being able to fall asleep because you couldn't stop remembering that it was Sunday night and a new school week started the next day?

But aside from that? Yeah, you were a dream.

At seven, you saw a show about a guy who donated his hair to Locks of Love, and decided you wanted to help someone in the same way. You spent almost two years growing your hair, in spite of the name-calling and endless rude questions, and sent your donation off midway through your third grade year. I was so proud of you. 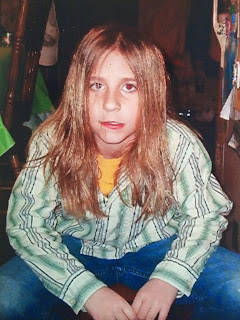 At nine, you blew away Truman's talent show by playing "Iron Man" on your electric guitar. The same year, you discovered YouTube and taught yourself to play the piano. You were playing more beautifully after two weeks than I had played after almost ten years of lessons.

You also used YouTube to start your first channel, HunTerAndTriStan. Here's one of those early gems now.

Gold. Pure gold. Sorry, I couldn't resist that one. Or this one. 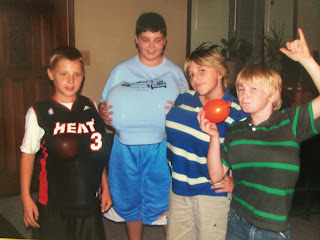 And then something terrible happened that rocked your world.

When you were 12, your dad and I got divorced.

I never wanted to be the reason you discovered how unfair life was.

I uprooted you. You wanted things to be as fair as possible, to keep your dad and me from being too sad. All of a sudden, for the first time in your life, you and I weren't spending almost every spare minute together. I only got to be with you fifty percent of the time. You had to move. You had to split houses, and belongings.

You handled it like a champion. You never cried. Never got mad. Never made a big deal about it or questioned why. You maintained straight A's. You kept hanging out with your friends. You defied the odds. 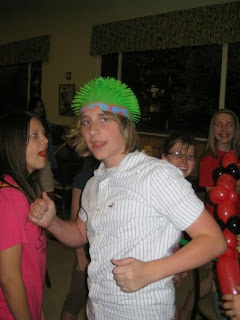 You played the drums in band, and won award after award. You hit your first home run in rec league baseball. You accepted my boyfriend and made friends with his kids. You segued into sharing a room for the first time and didn't complain. You played the piano at my wedding. You danced with me afterward. 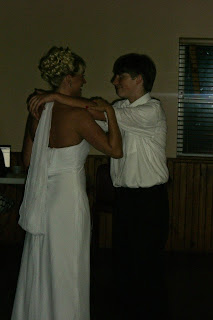 Three months later, I was facing a new cancer diagnosis and multiple surgeries. You wanted to do something to support me. You used your own little money, and had bracelets made. They went fast, but it started something. Team Mom-Tard was born, and the waves of support carried me through a dark time. 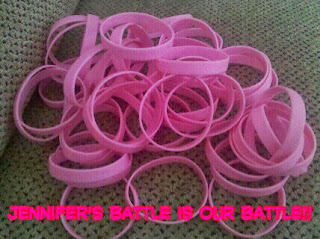 It wasn't until you were sixteen that you allowed visible cracks in the facade. Two weeks after getting your license, you hit the neighbor's mailbox, then came home. The police showed up not long after and threatened you with jail time, to my rage.

You didn't go to jail. So that was cool.

So, sure you've finally shown that you're human the last two years, but that made me love you even more. Even though your face looks like this sometimes. 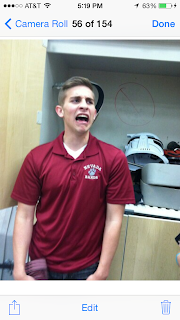 The truth is, I will never feel about anyone the way I feel about you. I'm your parent, but you're the one who has taught me so much.

Now, on this, the last Wednesday of your technical childhood, I think of how blessed I have been to have shared your first 18 years with you.

Even though you sleep in a hammock, and are a big stupid nerd. 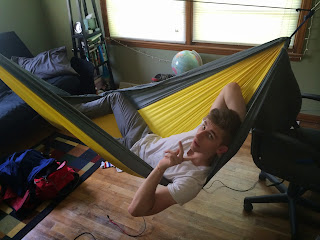 I love you, son. More than much.